Home > Hormones > Which Drugs or Food Interact With Contraceptives?

Which Drugs or Food Interact With Contraceptives? 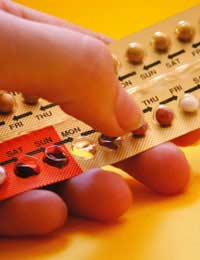 Contraceptives are given in a number of different ways - as daily oral pills either taken every day (either 21 active pills and seven dummy pills, or active pills every day) or taken for 21 days, with a seven day break. Oral pills can be a combination of an oestrogen and progesterone, or progesterone-only, and can be monophasic (the dose is the same every day) or multiphasic (the dose changes throughout the cycle).

Contraceptives can be injected, given as an injection into the muscles every three months, an implant as rods placed under the skin, and is delivered over three years, or as an intrauterine device (IUD), with the drug as part of an IUD placed in the womb, where it is released over five years. There are also emergency oral pills, which are higher dose pills taken within 72 hours of unprotected sex.

What’s in a Contraceptive?

Drugs used as contraceptives include:

What Drugs Interact With Contraceptives?

Contraceptive drugs can increase the side effects of beta blockers (used to lower blood pressure, corticosteroids (used to reduce inflammation and swelling), insulin (used in diabetes), selegiline (for Parkinson’s disease), theophylline (a bronchodilator for asthma and other lung diseases), or troleandomycin (an antibiotic).

Contraceptives can reduce the effectiveness of lamotrigine (used in bipolar disorder), and if the contraceptives are stopped, can caused side effects including nausea, dizziness and vision problems.

Aminoglutethimide (an anti-steroidal agent, used in Cushing’s disease and breast cancer), can affect the absorption of injectable medroxyprogesterone acetate if given at the same time.