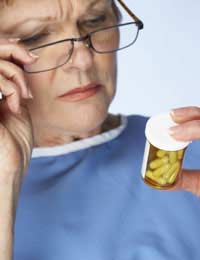 Taking drugs isn’t as simple as just swallowing them with a glass of water – the food we eat before we take the drug changes how a drug is absorbed. Having a high-fat meal before taking a drug can reduce or increase the effect that a drug has, potentially making it less or more effective, or increasing its side effects.

Drugs in the Stomach

As drugs are mostly absorbed in the small intestine, if the stomach empties more slowly, the drugs will be absorbed more slowly. Some drugs, such as painkillers, sedatives (drugs to calm people down) and hypnotics (drugs to help sleep) need to be absorbed quickly to work, so these may not work as well if taken with fatty food.

The stomach is very acid, and breaks some drugs down. The longer these drugs stay in the stomach, the more of the drug will be destroyed, so leaving less of the drug to have an effect on the body. Examples of this include some antibiotics such as azithromycin, ampicillin, erythromycin and phenoxymethylpenicillin, and isoniazid (used in tuberculosis).

Some drugs do not normally dissolve very easily, but stomach acid may make them more soluble, and so more easily absorbed. Some drugs need the acid conditions in the stomach to change them from an inactive form to an active form.

In these cases, if the drugs stay in the stomach for longer, more drug could be dissolved or changed and absorbed, so possibly increasing side effects, or requiring a lowering of the dose. Examples of this include amprenavir (used in HIV infection) and itraconazole and ketoconazole (used in fungal infections).

Some drugs dissolve in the fat in food and this improves their absorption, which could potentially lead to side effects. Examples of this include griseofulvin (an antifungal).

Some drugs come in extended-release formulations, which means they don’t need to be taken as often. Taking these with high fat food can result in ‘dose dumping’, when all the drug is delivered at once. This could cause side effects, and means that the drug won't be effective for as long.

Some drugs, such as orlistat, are designed to block the absorption of fat to help in the treatment of obesity. Taking these and still eating a high fat diet can result in unpleasant side effects, including fatty or oily stools and incontinence.

When taking drugs, check whether they should be taken before or after food. If they need to be taken after a meal, avoid high-fat food (unless specifically instructed to take the drug with fatty food), because this can affect the absorption of the drug, making it more effective (and potentially making side effects worse), or making it work less well. If in doubt, speak to a doctor or pharmacist.