Home > Digestive System > Which Drugs or Food Interact With Antacids?

Which Drugs or Food Interact With Antacids? 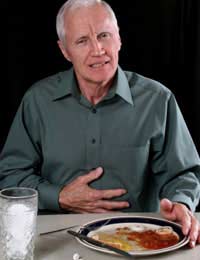 What’s In An Antacid?

The active ingredients in antacids can include:

What Drugs Interact With Antacids?

Antacids can make people absorb drugs more slowly – this can make drugs less effective, so it is best to leave an hour or two between taking an antacid and taking other drugs.

Because antacids reduce the acidity in the stomach and other parts of the gut, this might reduce the absorption of nutrients, including zinc and folic acid. This can also affect absorption of acidic drugs, including digoxin (heart conditions), phenytoin (epilepsy), chlorpromazine (schizophrenia) and isoniazid (tuberculosis). Other drugs where antacids can reduce the absorption include delavirdine, amprenavir and atazanavir (HIV), dasatinib (cancer), some antifungal medicines and some anticoagulants (blood thinning medications)

Antacids can also make some drugs be absorbed more quickly, which might make the drugs too effective, or the side effects worse. These include pseudoephedrine (blocked nose and sinusitis) and levodopa (Parkinson’s disease).

Magnesium trisilicate and magnesium hydroxide can bind to some drugs, which will make them less effective. Examples of this are the tetracycline antibiotics, including tetracycline, demeclocycline, doxycycline, minocycline and oxytetracycline, and iron and phosphate supplements.

Sodium bicarbonate makes the urine alkaline, which can change the speed at which the body gets rid of some drugs. This means that alkaline drugs, such as quinidine (corrects heart rhythm) and amphetamines (ADHD and narcolepsy) leave the body more slowly, and so might be too effective, or have more side effects; and acidic drugs, such as aspirin (pain, fever) leave the body more quickly, and so may be less effective.

What Foods Interact With Antacids?

Take antacids with food, as this can make their effect last longer. Caffeine and alcohol can trigger the production of more stomach acid, making heartburn worse.

Too much milk and dairy produce with antacids can lead to ‘milk-alkali syndrome’ or hypercalcaemia (high levels of calcium in the blood). Symptoms are an increased risk of bone fractures and kidney stones, weight loss, vomiting, constipation, weakness, tiredness and changes in mental status.

Drinking orange juice with antacids containing aluminium can increase the absorption of the aluminium.